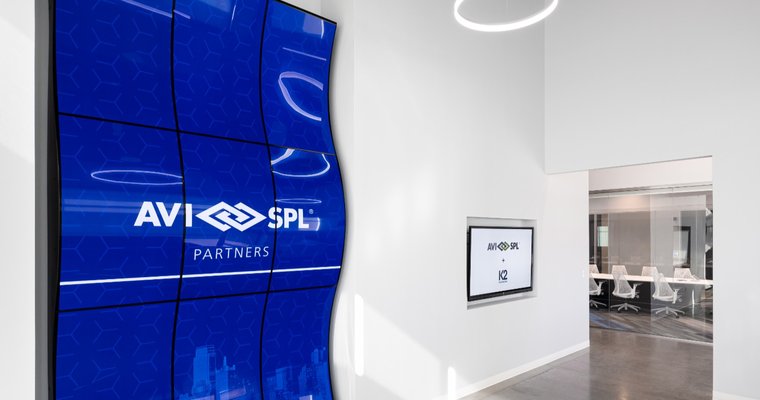 LG Business Solutions USA has installed a video “Wave Wall” with multiple curved OLED displays to form a high-definition surface at the AVI-SPL office in Dallas, according to a company press release.

The Dallas office supports AVI-SPL’s mission as “a digital enablement solutions provider that transforms how people and technology connect to elevate experiences, create new value, and enable organizations to thrive and grow,” according to the press release.

“We contract for a good deal of high-end signage and content, and there’s no better proof of our skill and ability to think outside the box than filling our own corporate lobby with show-stopping technology,” AVI-SPL Engineering Manager Erich Schriefer said in the release. “We recognized that these spaces could be product and expertise showcases for every partner, client or guest that visits the building, and worked with a variety of our suppliers to outfit different areas with various technologies.”

“We were thrilled to partner with AVI-SPL and LG on this project, and our expertise in designing mounts was exactly what they needed,” Kevin Barlow, director of business development at Draper, said in the release. “It was an unusual project, requiring semi-permanent installation with the ability to move the entire display at a moment’s notice. The lightweight OLED panels allowed us to use a manual design, without motorization, which simplified the build. The end result is the appearance of a permanently-installed curved video wall that’s easily movable.”

“It was super interesting and exciting to actually bend the OLED displays on site, under the guidance of on-site LG professionals,” Schriefer said in the release. “There’s a curve table that the display attaches to, then a ratchet you turn, and it bends the display to the precise curve you need. Assistance from Draper and LG was critical to the success of this part of the project.”